One-Sentence Takeaway: A 15- to 20-minute wait in conjunction with the knock-and-announce rule satisfied the Fourth Amendment. 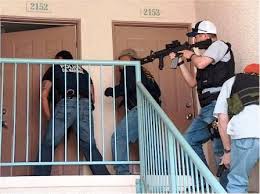 Summary: In executing a search warrant, the officers knocked on the door and announced “police search warrant.”  After waiting for 15- to 20-minutes, the officers broke through the front door and found drugs and other evidence suggesting drug dealing.  Defendant claimed that he was in the shower and moved to suppress the evidence by arguing that the officers waited an unreasonably short period of time before forcing their way through the door.

The United States Supreme Court disagreed and held that a 15- to 20-second wait in conjunction with the knock and announce rule satisfied the Fourth Amendment.

The Court explained, “the issue comes down to whether it was reasonable to suspect imminent loss of evidence after the 15 to 20 seconds the officers waited prior to forcing their way.  Though we agree with Judge Fisher’s dissenting opinion that this call is a close one . . . we think that after 15 or 20 seconds without a response, police could fairly suspect that cocaine would be gone if they were reticent any longer.  Courts of appeals have, indeed, routinely held similar wait times to be reasonable in drug cases with similar facts including easily disposable evidence.”