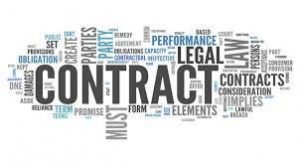 Contracts Law – Remedies.  Liquidated damages are damages that the parties to a contract agree upon at the time of formation of the contract as the actual damages that will occur from a future breach of the contract (note – a party is still required to prove in court that the other party breached the contract).  In other words, a liquidated-damages provision in a contract is an estimate, made by the parties at the time they enter into the contract, of the extent of the injury that would be sustained as a result of breach of the agreement.  Carrothers Constr. Co., L.L.C. v. Hutchinson, 288 Kan. 743, 754 (2006) (“[A] liquidated damages clause in a contract is an advance settlement of the anticipated damages arising from a future breach.”); Dave Gustafson & Co., Inc. v. South Dakota, 83 S.D. 160, 164 (1968) (“The effect of a clause for [liquidated] damages in a contract is to substitute the amount agreed upon as liquidated damages for the actual damages resulting from breach of the contract, and thereby prevents a controversy between the parties as to the amount of damages.”).

When there is a breach of a contract with a liquidated damage clause, the non-breaching party’s recovery is limited to the amount set forth in that clause; no larger or smaller sum can be awarded even though the actual loss may be greater or less.

Liquidated damages law dates back to early English legal history, when equitable principles were developed to avoid the unfair enforcement of penal bonds used to secure performance of contracts.  As liquidated damages provisions evolved, courts, legislators, and commentators have sought ways to balance the policies encouraging parties’ freedom to contract with the interests of equity and principles of just compensation.

Under the traditional approach, courts viewed liquidated-damage provisions “with a gimlet eye.”  Over the years, however, the historical antipathy has dissipated as parties to contracts, attorneys, and the courts recognized that such provisions served valuable purposes.  See, e.g., Leeber v. Deltona Corp., 546 A.2d 452, 455 (Me. 1988) (noting that liquidated damages function “as an economical alternative to the costly and lengthy litigation involved in a conventional breach of contract action,” and that “[e]fforts by contracting parties to avoid litigation and to equitably resolve potential conflicts through the mechanism of liquidated damages should be encouraged.”); Wassenaar v. Panos, 331 N.W. 357, 362 (Wis. 1983) (“[C]onsiderations of judicial economy and freedom of contract favor enforcement of stipulated damages clauses.”).

“Today the law does not look with disfavor upon ‘liquidated damages’ provisions in contracts.  When they are fair and reasonable attempts to fix just compensation for anticipated loss caused by breach of contract, they are enforced.”  Priebe & Sons, Inc. v. United States, 332 U.S. 407, 411 (1947).  The modern approach is “to look with candor, if not with favor” upon liquidated-damages provisions in contracts when those provisions were “deliberately entered into between parties who have equality of opportunity for understanding and insisting upon their rights.”  Wise v. United States, 249 U.S. 361, 365 (1919); see also District Cablevision Ltd. Partnership v. Bassin, 828 A.2d 714, 724 (D.C. 2003) (“When a liquidated damages provision is the product of fair arm’s length bargaining, particularly between sophisticated parties, common law suspicions may be eased and more latitude may be afforded the contracting parties to agree as they wish on the remedies for breach.”).  Relevant to this inquiry is the sophistication of the parties and whether both sides were represented by able counsel who negotiated the contract at arms length without the ability to overreach the other side.  Where the court finds that there was disparity of bargaining power and one party unilaterally imposed a liquidated damages provision in an adhesive contract, the skepticism shown by the common law to liquidated damages is at its height.  See, e.g., Weber, Lipshie & Co. v. Christian, 52 Cal. App. 4th 645 (1990) (noting that California law imposes “stricter requirements” for liquidated damages clauses in consumer transactions).

Under the common law approach, a liquidated-damages clause is unenforceable unless two independent requirements are met. First, “the harm caused by the breach” must be “incapable or difficult of estimation,” and second, “the amount of liquidated damages called for” must be “a reasonable forecast of just compensation.” Rio Grande Valley Sugar Growers, Inc. v. Campesi, 592 S.W.2d 340, 342 n.2 (Tex. 1979); see also Council v. Hogan, 566 A.2d 1070, 1072 (D.C. 1980) (holding that for a liquidated damages clause to be valid and enforceable, and not void as a penalty, the common law insists that “the liquidated damages must not be disproportionate to the level of damages reasonably foreseeable at the time of the making of the contract.”); Order of AHEPA v. Travel Consults, Inc., 367 A.2d 119, 126 (D.C. 1976) (“Agreements to pay fixed sums plainly without reasonable relation to any probable damage which may follow a breach will not be enforced.”); Lake River Corp. v. Carborundum Co., 769 F.2d 1284, 1290 (7th Cir. 1985) (“When a contract specifies a single sum in damages for any and all breaches even though it is apparent that all are not of the same gravity, the specification is not a reasonable effort to estimate damages; and when in addition the fixed sum greatly exceeds the actual damages likely to be inflicted by a minor breach, its character as a penalty becomes unmistakable.”).