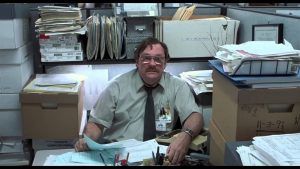 In employment law, the term “constructive discharge” refers to a scenario where an employer’s conduct effectively forces an employee to resign and leave his or her place of employment.

As explained by the California Supreme Court in Turner v. Anheuser-Busch, Inc., 7 Cal. 4th 1234 (1994), “[a]lthough the employee may say, ‘I quit,’ the employment relationship is actually severed involuntarily by the employer’s acts, against the employee’s will.  As a result, a constructive discharge is legally regarded as a firing rather than a resignation.” Id. at 1244-45; see also First Judicial Dist. Dep’t of Correctional Servs. v. Iowa Civil Rights Comm’n, 315 N.W. 2d 83, 87 (Iowa 1982) (“Constructive discharge arises when the employer deliberately makes an employee’s working conditions so intolerable that the employee is forced into an involuntary resignation.”)

Actual discharge carries significant legal consequences for employers, including possible liability for wrongful discharge. In an attempt to avoid liability, an employer may refrain from actually firing an employee, preferring instead to engage in conduct causing him or her to quit. The doctrine of constructive discharge addresses such employer-attempted “end runs” around wrongful discharge and other claims requiring employer-initiated terminations of employment.  Turner v. Anheuser-Busch, supra 7 Cal. 4th at 1244; see also Balmer v. Hawkeye Steel, 604 N.W. 2d 639, 641 (Iowa 2000) (“Constructive discharge provides a mechanism to avoid the technical requirement that wrongful discharge be based on employer-initiated discharge.”).

Thus, an employee who resigns and later brings a lawsuit against his or her employer for wrongful termination must first prove constructive discharge and then establish an independent breach of contract or tort in connection with the employment termination in order to obtain damages from his or her employer.

To establish constructive discharge, the plaintiff must show that the “working conditions would have been so difficult or unpleasant that a reasonable person in the employee’s position would be compelled to resign.” Bourque v. Powell Elec. Mfg. Co., 617 F.2d 61, 65 (5th Cir.1980).

As the court explained in Gormley v. Coca-Cola, supra, in order to prove that his or her resignation was in fact a constructive discharge, “an employee must [establish] facts sufficient to find that the employer made working conditions so intolerable, when viewed objectively, that a reasonable person would be compelled to resign.  Essentially, a plaintiff must show that she had no other choice but to quit.  The bar is quite high for proving constructive discharge.”  109 P.3d at 282-83; Turner v. Anheuser-Busch, supra, 7 Cal. 4th at 1244-45 (“The cases are in agreement that the standard by which a constructive discharge is determined is an objective one — the question is whether a reasonable person faced with the allegedly intolerable employer actions or conditions of employment would have no reasonable alternative except to quit.”).

ACTIONS BY THE EMPLOYER THAT MAY CONSTITUTE CONSTRUCTIVE DISCHARGE

Following are a few examples of employers’ actions that will likely constitute constructive discharge:

Case Examples: See Douglas v. Orkin Exterminating Co., 2000 WL 667982, at *4 (10th Cir. May 23, 2000) (evidence of a demotion and lower pay may establish constructive discharge); Keller v. Bd. of Educ., 182 F.Supp.2d 1148, 1157 (D.N.M.2001) (holding that constructive discharge claim was supported by the record and justified denial of summary judgment when employee was reassigned to a job without a job title and description, her office was in a supply closet, and her salary was cut by more than one-half, amounting to less than her retirement benefit); Gower v. IKON Office Solutions, Inc., 177 F.Supp.2d 1224, 1233 (D.Kan.2001) (holding claim of constructive discharge was supported by evidence that the worker was given twenty-four hours to sign a new contract limiting the number of accounts he could service, reducing his commission in one account from $8,000 to $3,000 per month, and changing his reporting requirements); Goodwin–Haulmark v. Menninger Clinic, Inc., 76 F.Supp.2d 1235, 1239 (D.Kan.1999) (concluding that overt pressure to resign raised genuine issues of material fact to justify denial of summary judgment regarding constructive discharge); James v. Sears, Roebuck & Co., 21 F.3d 989, 993 (10th Cir.1994) (finding that systematic threats and pressure to retire constituted constructive discharge).

ACTIONS BY THE EMPLOYER THAT LIKELY WILL NOT CONSTITUTE CONSTRUCTIVE DISCHARGE

For example, a slight decrease in pay or loss of overtime hours have been held to not constitute constructive discharge.